A Rape is a Rape & a Rapist is a Rapist 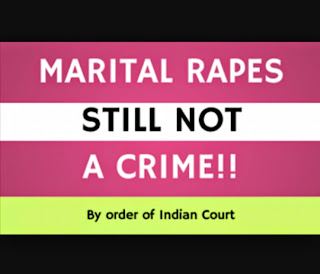 According to our government, it is okay to rape your wife. They said the concept of marital rape cannot be applied in India as marriage is a pure alliance in Indian society, keeping in mind our poverty, illiteracy, traditions, culture and values. Apparently, marriage is a license to rape.
But here’s why we need a marital law.

* 1 in every 5 Indian men admit for forcing their wives into sex, according to a 2011 study by the International Center for Research on Women
*127 countries don’t criminalize rape within marriage
*1 in 3 women is beaten, forced for sex, tortured or otherwise abused by their spouse or an intimate partner in their lifetime
*Many women experience depression because of violation and unwanted sexual acts

Marriage is a sacred institution which signs up by two people for equality, respect and love. The term ‘marital rape’ is an forceful or unwanted sexual act by a spouse without the other person’s consent. A rape is a rape and a rapist is a rapist, doesn’t matter after or before marriage. Many feminists and activists are demanding for inclusing marital rape as a criminal offence. But according to our law, when you sign up for marriage, you sign up for sex. In our country, a marriage is a license to hit a woman by her in-laws and husband. They can burn a woman, can exploit and harass her emotionally and physically, rape her. Violence is a deep-rooted reality of Indian women. Even the parents of the daughters usually come up with the punch line- “Adjust in the new household” or “Adjustment is another name of the life” or “Adjustment is another name of marriage”. There are many other women who cannot come in front and fight for themselves. What about them? There is no chance for them to get justice. But we have no legal protection in India. According to Section 375 of the IPC: “Sexual intercourse by a man with his wife, the wife not under 15 years of age, is not rape.” On one hand there is a law that a girl cannot get married before the age of 18 and on the other hand they are saying that marital rape is not a crime if the girl is above 15 years of age.

“When a woman gets married, she wants love, respect and equal partnership, not violence and rape”

For centuries, women have always been considered to be inferior to men or else they have been considered to be sexual objects. Country like India cannot criminalize marital rape as a criminal offence and in real, we can’t expect that to happen even. We can’t expect this in a country where women are sold in the pretext of dowry! Where the girl raised with the lessons to believe and the future-in-laws are now your new parents, but the boys are taught that women are drums remain in tune, only when beaten! Where we spend more money on girl’s wedding than on her education!
What can we expect from a country like this, where as a married girl, her surname, her identity, her responsibilities, her priorities, the home where she born and brought up, or for that matter, even her parents shall change! And then she will live with her in-laws and husbands, of course her new priorities, who has a legal right to torture and harass her. But today, women want more control over their bodies and their minds. They just want equality and an equal partnership in relationships. Is it a big thing to ask for? There are some people out there, who will think and say that all men are not same, all men are not dogs.. But I wonder why it would bother the people, who are not one of these.

India must learn from these countries

*In U.S marital rape is a crime in every state by 1993. They treat and penalize marital rape like any other rape
*In Britain rape within a marriage bee a crime since 1991. The 2003 Sexual Offences act clearly clarifies the law and accused the punishment just like any other rape.
*In Bhutan, Marital rape is punishable by a minimum prison term of 1 year and a maximum of three years.
*36 other countries, including Nepal have outlawed marital rape and offence it as a crime.


And yet, Indian laws have consistently stated that a man can be punished for rape “unless the woman raped is his own wife”