Lackadaisical ladies of the night


LACKADAISICAL LADIES OF THE NIGHT

Prostitution should be legal in India 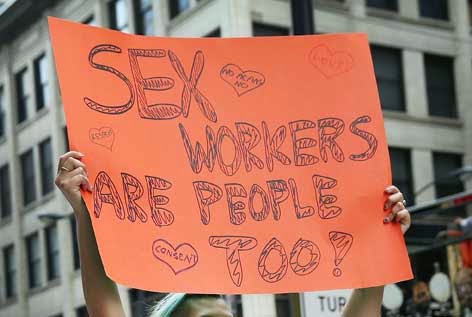 In India prostitution (the exchange of sexual services for money) is illegal but this business is flourishing right under the nose of law enforcement agencies. Not only this, prostitution has been a part of life in India in the guise of a tawaif or a devadasi as different times have called them in India — are the facilitators of what some people say is “oldest profession”. A sorry state of affairs is that there are more than 20 million prostitutes in India if a Human Rights Watch report is to be believed — and as many as 35% of them enter at an age less than 18. This has been the demand of several sections of the society. Legalisation prostitution may prove helpful in stopping sexual harassment and rapes. Legalising prostitution is a way best deterrent to rapes. The sex starved people can easily go there and set up their mind to come there often when needed. As we all know banning prostitution doesn’t work at all but government can protect and help these sex workers. Sex workers are the most marginalized members of society. They are normal human beings, with normal needs. They want bank accounts and schools for their children and some respect, not about their profession but for them as a human. They are mostly exploited by pimps, abusive clients and, of course, the police. They have nowhere to turn to because the work they do is illegal. Legalising prostitution would mean that pimps and brothel owners would be held accountable for the treatment of sex workers, and that abused sex workers would have the option of turning to the law for protection. Legalising will only end up serving the exploiter only. This will help the problems occurring in our society related harassment and rapes so as the sex workers. Sex workers are people too.